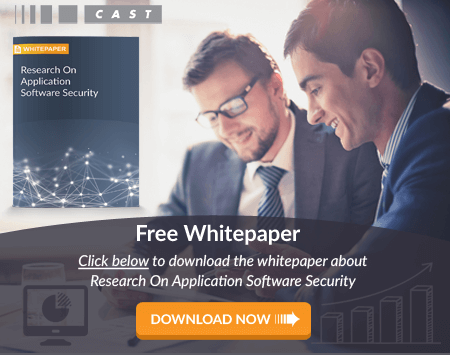 The following tables explain the CAST AIP coverage for these security standards:

All the categories, rules, and related description are referenced from CWE/SANS and CWE/SANS Top 25 Most Dangerous Software Errors.

These weaknesses are related to insecure ways in which data is sent and received between separate components, modules, programs, processes, threads, or systems.

The weaknesses in this category are related to ways in which software does not properly manage the creation, usage, transfer, or destruction of important system resources.

The weaknesses in this category are related to defensive techniques that are often misused, abused, or just plain ignored.

All the rules and related description are referenced from OWASP.

"Injection flaws, particularly SQL injection, are common in web applications. There are many types of injections: SQL, LDAP, XPath, XSLT, HTML, XML, OS command injection and many more.Injection occurs when user-supplied data is sent to an interpreter as part of a command or query. Attackers trick the interpreter into executing unintended commands via supplying specially crafted data."

In addition to the dataflow searched quality rules, CAST AI Platform provides out of the box the following framework based rules also grouped into the technical criteria metric called "Secure Coding - Input Validation":

For applications following the OWASP recommendation to implement object relational mapping (ORM) libraries such as Hibernate, CAST provides a specific rule that checks that only Hibernate is used to access the database:

"Cross-site scripting, better known as XSS, is in fact a subset of HTML injection. XSS is the most prevalent and pernicious web application security issue. XSS flaws occur whenever an application takes data that originated from a user and sends it to a web browser without first validating or encoding that content."

Being a special form of injection, a part of the solution to get rid of the XSS threat comes from checking the protection in place for A2 Injection Flaws (see A2). Indeed, beside A2 protection (validation of all incoming data), the OWASP Top Ten document recommends the "appropriate encoding of all output data".

CAST supports checking that using the same technology as for Injection Flaws: dataflow and tainted variable analysis to track input data thru out the source code in order find a path where the input data is sent back to the user without prior sanitization / encoding. The User Input Security Analyzer offers directly supports Cross-Site Scripting flaws that can be found in the technical criteria metric called "Secure Coding - Input Validation". As for A1-Injection flaws, the user can customize interactively the analysis to meet specific needs: adding specific sanitization, input or target methods for a given type of flaw is done directly thru the GUI. XSS results are displayed in the dashboard which offers the view of precise path(s) where the vulnerability exist in a call path view directly in CAST AD Dashboard.

Most CSRF defences can be bypassed using attacker-controlled script, so the a required step to protect against A8 is to implement a proper Cross Site Scripting protection. See the description for A3 above.

Rule of a previous version of the OWASP Top 10 with no equivalent in recent versions. Kept here for reference.

"Applications can unintentionally leak information about their configuration, internal workings, or violate privacy through a variety of application problems. Applications can also leak internal state via how long they take to process certain operations or via different responses to differing inputs, such as displaying the same error text with different error numbers. Web applications will often leak information about their internal state through detailed or debug error messages. Often, this information can be leveraged to launch or even automate more powerful attacks."
CAST supports the protection against "A6 – Information Leakage and Improper Error Handling" thru the use of the following rules integrated in the technical criteria metric called "Programming Practices - Error and Exception Handling":