The Days of Floppy Drives and Incompatibility

One of those vivid memories from my childhood is learning my first programming language at computer camp in 1985. The language was BASIC and we learned on an Apple IIc. My final project for the summer session was an original text-based adventure game called “Caveman” that probably clocked in at about 50 lines of code tops. I was 11 years old and super proud of my accomplishment. However, I also recall how disappointed I was that I could not bring my new creation home to play on our Apple II+ computer. The reason being that the media we used at computer camp was a standard audio cassette tape (yep, software could run on cassette back then) and my Apple II+ used a 5.25” floppy drive. I had no access to the tools that would enable me to transfer my code from cassette to floppy disc. So, “Caveman” lived and died that summer.

Fast forward several years to my time in college when I graduated to learning Pascal and C in computer science class. We started to standardize computer media much more and most of my work for these classes was done using 3.5” floppy discs. I was amazed at how I was able to transfer files from the PCs in the lab to my IBM PS/2 in my dorm room with ease. If only this were possible in 1985, I’d still be playing Caveman! This newfound level of compatibility quickly fell apart when I took a class that utilized Macs instead of PCs. Sure, both systems used 3.5” floppy discs. But, I had to reformat the disc every time I wanted to use it on my PC after using it on the Mac…ugh!

Today, most of these compatibility issues that we dealt with years ago are for the most part solved. I can seamlessly collaborate with colleagues and friends across PC, Mac, web, smartphone, tablet, etc. I can even save a photo taken by my smartphone to a cloud-based storage service such as OneDrive and instantly view the photo on my TV using my Xbox…all within a matter of seconds. We perform tasks like this every day as second nature…however, I often forget how much we take for granted the level of compatibility we have today compared to just a few years ago.

Gaining Visibility in a Complex World

Although the intent of compatibility and interoperability is to make life easier, the result has been a significant rise in the diversity of technologies deployed in a typical enterprise. And, in some cases, the result is actually a significant increase in complexity across the IT landscape within most organizations today. CAST’s own research from decades of analyzing enterprise software systems shows that the average enterprise software application is developed using more than two different programming languages and the average organization has over 10 programming languages in use across the enterprise. Combine this with diverse databases, infrastructure, APIs, cloud providers, etc. and it is clear why the technology landscape has become increasingly more opaque, quite the opposite of the original intent of interoperability. 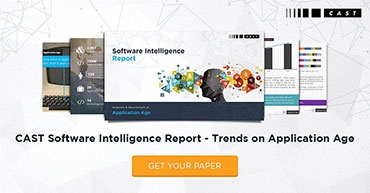 CAST Highlight is an Application Portfolio Analysis platform that hundreds of organizations have used to gain rapid visibility across their diverse and complex software estates to help improve application rationalization, cloud migration, and open source risk management. In that vein, the December 2019 release of CAST Highlight introduces a number of new features to help address the complex and diverse environments of today’s enterprise. For example, we have added support for Google Cloud Platform specific patterns in our Cloud Ready dashboards for customers that are considering a move to GCP. This complements the Azure and AWS specific patterns already in the product and we now support the top three cloud providers for customers that have a multi-cloud strategy, which is quite common. New programming language support has been added to CAST Highlight in this release including: Swift (iOS), Kotlin (Android), Apex (Salesforce.com) and Natural Adabas. This helps increase the platform’s technology coverage in today’s diverse world.

The technology world may be more interoperable today than it was decades ago, however this does not necessarily mean it is simpler. CAST Highlight helps provide the visibility to better manage your software portfolios in this complex environment. See below for the rest of the new features you can now enjoy in CAST Highlight.

Greg Rivera Vice President
As Vice President of CAST Highlight, Greg leads product strategy for the CAST SaaS platform helping customers and partners accelerate app modernization / cloud migration, rationalize their app portfolios, and reduce open source risk. He has worked with Fortune 1000 companies such as Microsoft, IDG Communications, and Arrow Electronics for over 20 years in technology and media, helping them make successful digital transformations. Greg has a B.S. in Electrical Engineering and an M.S. in Management of Technology and is passionate about applying technology to improve business and our everyday lives.
More Posts from Greg >>
Write a review Average rating:
()
★
Newest on top Oldest on top
Load more reviews
Thank you for the review! Your review must be approved first